skip to main | skip to sidebar

THIS SITE IS NO LONGER BUT I LIVE ON, ONLINE...

Blogspot has been fun but now I have a new, fancy real website: www.eliannalev.com

Bookmark it. Check it out. Love it. I do.
Posted by Elianna Lev at 4:30 PM No comments: 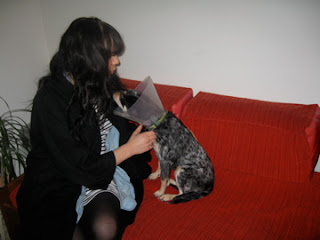 Click here to listen to Episode 21 of the People's Program Project.

Yah! As of Feb. 7th, the People's Program Project will be one year old! To celebrate, I asked the super sweet and immensely talented Louise Burns to join me for an afternoon of chatting and pomello eating. When Louise was in her teens, she played in the pop band Lillix, which gave her incredible experience and insight in the music industry. The lady's written music with Linda Perry! She's toured the world! She met Madonna! Now she does equally as exciting stuff, just on a different level. She's in the pop noir trio the Blue Violets and has a solo project called Moonshiner. Both are absolutely delightful. We talk about what it's like to live a pop star dream in your teens, the awesomeness that is Japan and experiencing true Hollywood weirdness. Expect to hear a lot more of this beautiful lady's voice in the very near future.

As for me, well, um, I'm a single mum now. I have a dog named Dutchess "Dutchie" Fancydance. (Pictured above.) She's a five-year-old Blue Heeler/Chihuahua cross and 100% snugglemuffin. I don't how how I got so lucky to get such a dream dog. She's very special. It's weird, though, having this little creature be absolutely infatuated with me. Not sure if I can get used to it. Now I know how all my ex-boyfriends felt.

Gonna try to work on podcast stuff in the near future but for now, your best place to get your fill of me and my stories is through my column with the Vancouver Observer. It's called I'm a Good Story and it's kinda like P3 but in written form. Just me chatting with rad people who are doing rad stuff. Fun stuff. Also, I have a Tumblr account, which is basically snapshots of my emo moments. And my website will be up and running soon, hopefully. Be sure to check back there when you can.

Posted by Elianna Lev at 8:39 PM No comments: 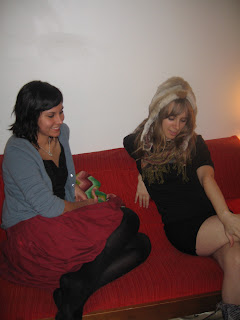 Click here and or here to listen to Episode 20 of the People's Program Project.

Ayma and Elly here. We decided to trepidatiously launch our new project, which might be sketch comedy related. Comedy. What a word.

It's called Rape Whistle Fan Club and it's basically us doing a variety of stuff that makes us laugh and hopefully you too.

On this episode we debut the Scat Explosion, a talk show entirely inspired by Randy Bachman's CBC program Vinyl Tap. (Please click on that link. It's amazing.)

Thanks to our rowdy but enthusiastic studio audience, Karen Pinchin, Ben Frey and Cam MacLeod.

We're hoping to get on a bill for our live performance debut some time soon. We'll keep you posted via the Facebook fan page we'll inevitably create and force our friends to join.
Posted by Elianna Lev at 6:49 PM No comments:

Here is the second half of the event I co-organized on Dec. 1st at Little Mountain Studios. It featured performances by... 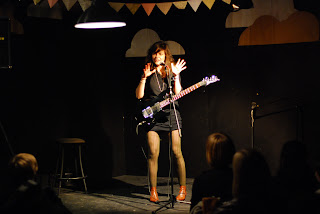 Jenna Rogers, who sang a song (you can't really hear the guitar on the the podcast...sorry about that) and told a story about being in a band with a wizard, but I had to cut it out... 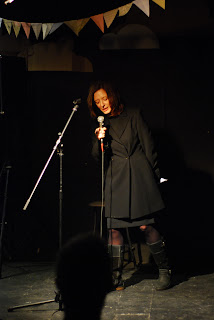 Vancouver Observer editor Linda Solomon, who talked about frenching a US president (!)... 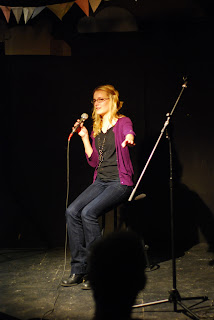 Amanda McCuaig, who talked about taking her boyfriend home to Idaho and showing him what Republicans are really like... 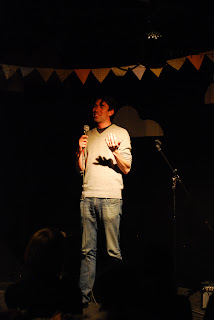 Taz Van Rassel told a story about surviving life on the streets of Kitsilano (a fancy neighbourhood here in Vancouver) ... 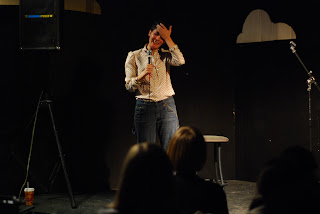 Lizzy Karp told a story about growing up non-Mormon in Salt Lake City... 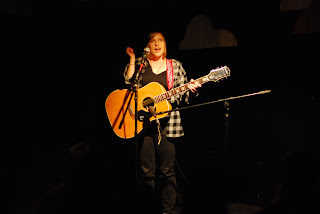 And our last performer Lisa Joyce, who talked about the first time she thought she was dying, with a fitting song to accompany it.

There was also a performance by the hilarious duo of Good Morning World, Pat Kelly and Pete Oldring. But the audio was sort fucked up so I couldn't really use it. Check them out on YouTube...they are super funny and talented.

Not sure when the next podcast will be out. Probably in the New Year. Until then, read my column and visit my Tumblr site, as those are easier to update. Happy holidays, y'all!
Posted by Elianna Lev at 2:57 PM No comments: 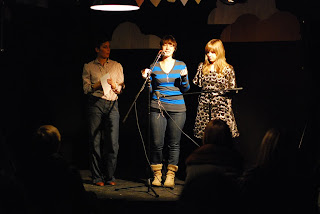 Click here to listen to episode 18 of the People's Program Project.

One of the things I've been working hard on recently is a storytelling night called Rain City Chronicles. We had our first event on December 1st at Little Mountain Studios. It was a great success. We've got nothing but really positive feedback and it seems like the city is ready for this kind of thing. We plan on doing it every season so the next one should be in March. This special episode of P3 features stories by CBC Radio 3's Grant Lawrence, who talked about his first experience with a pacific octopus... 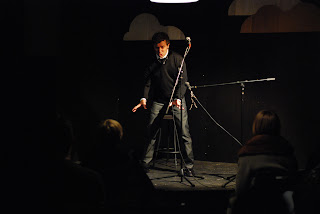 Rain City Chronicles co-organizer and freelancer writer Karen Pinchin, who talked about her first time getting in a car with a stranger... 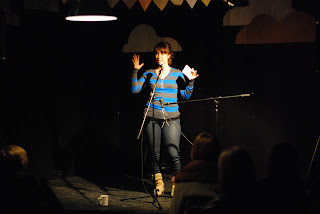 Sex guy and Manhussy's Cam MacLeod, who talks about the first time he realized girls go crazy when you've had sex with them... 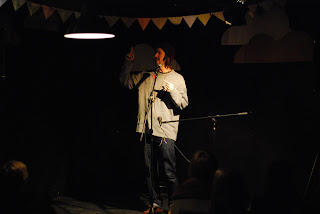 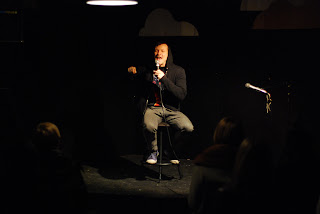 And me. I told a story about the first time I sang with Belle and Sebastian on stage... 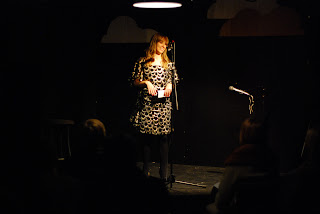 Music is by Basil Waugh... 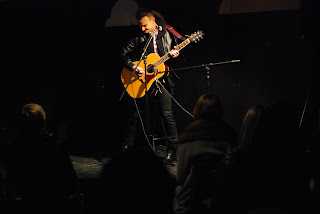 I'll try to have the second half of the evening out in podcast format by next week. In the meantime, enjoy!
Posted by Elianna Lev at 1:45 PM No comments:

The Vancouver Observer is letting me write a column. It's gonna be weekly. Click here to read it. Follow along if you can! Also... 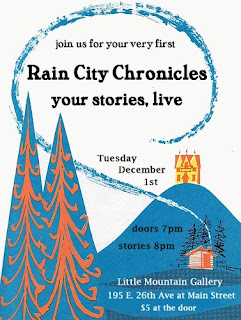 The first Rain City Chronicles storytelling night, which is being organized by Lizzy Karp, Karen Pinchin and myself, is happening on Tuesday, Dec. 1 at Little Mountain Studios. It is going to be amazing, to say the least. The theme is first, to honour our first event. I'm gonna try to record the night for my podcast so stay tuned. 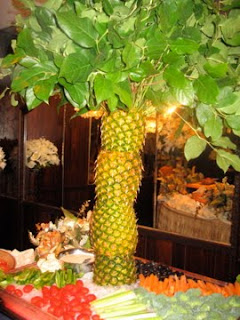 To listen to the People's Program Project, click here.

It has been a while, hasn't it? I have been busier than ever and out of town so no hard feeling, alright?

Something very exciting is scheduled to happen either this week or next so stay tuned.

No podcast for a while longer but soon enough. I'm co-organizing a storytelling night at Little Mountain with some really great storytellers (myself included) on Dec. 1st but I'll promote that in more details when it's a little more organized. It's a-coming.

Ok, first off, our friends at Vancouver Is Awesome are doing a donation drive. Please consider donating 'cause they are, well, awesome. Very posicore, very community focused, very supportive. Awesome all around. Do it. Give them some money.

Next, we have some photos of my trip to NYC. It was very different than other trips - I was dealing with some internal emo issues, but luckily had some wonderful moments. Including... 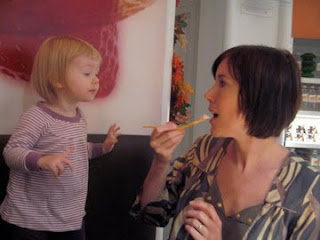 Seeing my dear friend Sue and her wittle bacon-ette, Lucy. This wee little thing knows how to ask for crackers and drum sticks (as in the musical instrument, not the food) in sign language. She seriously knows how to drum. At 18 months. Not only is it incredibly cute but incredibly impressive. 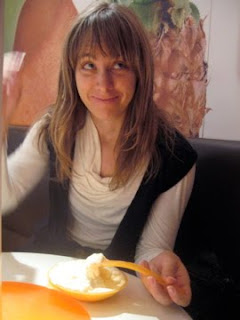 Going to Rice to Riches, which is one of my favourite places on earth. I have a thing for rice pudding. They have a whole variety of flavours. It's worth a trip every few years. 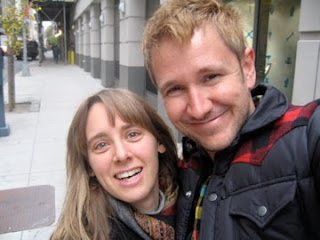 Seeing my NYC friends, including my dear friend Bob. He's one of my favourite people of all time. I've known him for 10 years and it's always a blast of good vibes every single time I see him, regardless of how long it's been. Hanging out with him is a failsafe method to happiness. Also, his production company is putting out some very satisfying programming. Worth investing in cable for. 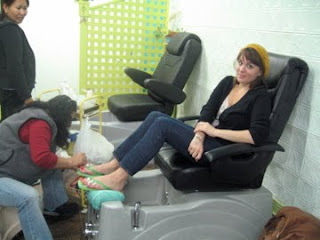 This girl is amazing. I spent a lot of time with her this time around and couldn't have asked for a better host. I found myself at very interesting, happening events that I wouldn't have otherwise. She also convinced me to get a $7.50 manicure, which was the best thing I could have ever done. (We'll get to that.) 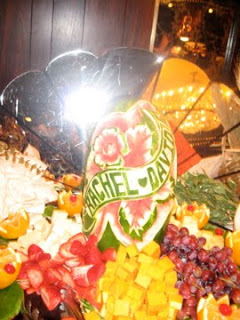 Rachel and David put on such a beautiful wedding. So down-to-earth and downhome and unpretentious. They held it at the Polanise Terrace. And while the Poles aren't generally known for their exquisite taste (but those who have it, fucking have it,) the wedding made up for it in heart. And really, when it comes to a celebration of love, that's the only things that matter. Here's the beautiful, happy couple... 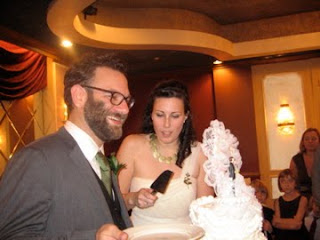 The next day they had a brunch for out-of-towners, which was at an authentic German beer hall. I was happy because there were plates of meat everywhere, and those were just the appetizers. 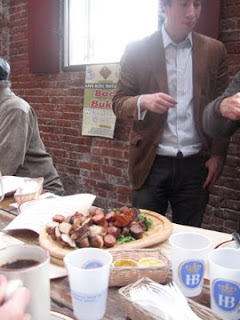 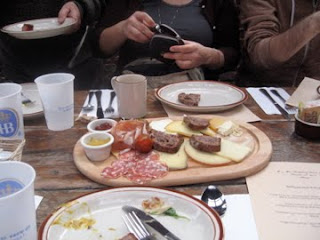 Then I stayed at a hotel called the Gershwin. It's the kind of place that sells itself on its decor, but the decor was horrendous. I have a feeling it was built by people who have no idea about taste or design or art but call things "funky." Luckily, the staff were fantastic and the location was great - right next to the equally as tacky and offensively stupid Sex Museum. Don't waste your time there. Here was my room -and my manicure, which I absolutely fell in love with. I couldn't (and can't) stop starting at it. 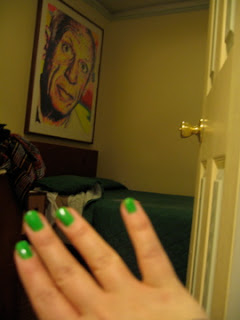 The weather was worse than Vancouver's pretty much the whole time I was there. That sucked. But luckily, on the last full day I was there, the rain stopped and I booted it to that big park in the middle of the city. I stumbled across a beautiful statue, called Romeo and Juliet (oh and my manicure again.) 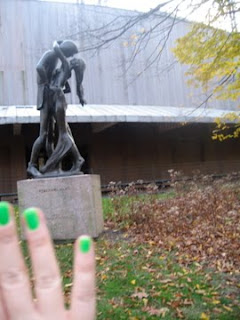 The next morning was glorious so I got up early, hurried back to Central Park and found a statue that I've wanted to see since I was 14 and obsessed with Alice in Wonderland, after reading this book. Here it is (along with my manicure, again.) 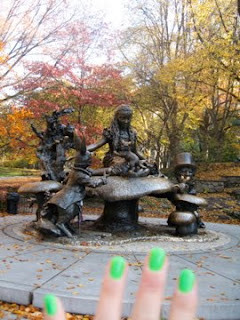 Other highlights include: going to B EAST, which is a beautiful club thing, for some party thrown by Ryan McGinness, I believe. There were all these fancy big time artist and designer types (and Kelly Osbourne.) Unfortunately I was not prepared for such a party and felt shlepy and grumpy the whole night. But there was really fun music.

Seeing my good friend Lisa and checking out terrible comedy. We were more or less the only two people there and were heckled by the comedian on our way out.

Spending a lovely night with my friend Sam, wandering the West Village and having a good heart to heart.

So there. Glad I took the time to update things. These days I'm more prone to post things on Tumblr but I'll go back and forth till my site is finally up. Which won't be for a while. But when my exciting thingy is done in the next week or so, I'll surely let you all know. Lots to do until then. Please stay tuned.
Posted by Elianna Lev at 6:38 PM No comments:

Elianna Lev
I'm a writer/broadcaster/storyteller based in Vancouver. I know you have a good story to tell. I want to hear it. Get in touch at write@eliannalev.com